While checking out my flist, I found this fun challenge over at enemytosleep's. It's a 30 day anime challenge. I'm going to do 3 days at a time like she did & hopefully keep this short & sweet. XD

Here's the challenge image for those of you who also want to play along: 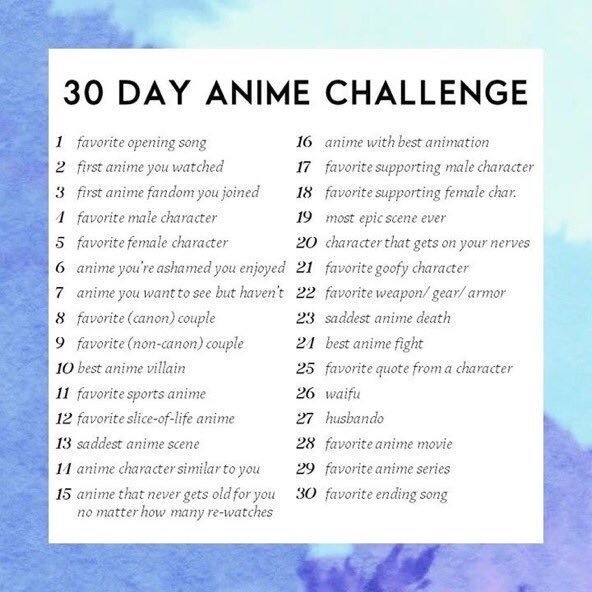 7) Anime you want to see but haven't: hmmm... can't really think of anything for this. XD

8) Favorite (canon) couple: Aya Sohma & Mine Kuramae from Fruits Basket. I LOVED this manga series as well as the anime, which sadly (at the time) never finished the series, stopping about halfway. They have since rebooted it, which I'm enjoying as much as the original. :D So while I know these two are a couple from reading the manga & it's kinda hinted at in the first series; in the reboot, they haven't gotten that far yet. As for my favorite canon gay couple, that would be Yuuri & Victor from Yuuri!!! on Ice. *sighs* I don't have a favorite canon lesbian couple as I've only seen one yuri series, which I can't even remember the name of it, as well as another, where I think the couple is more of a non-canon than canon couple. So you'll have to forgive me for that one. And yes, I know there are series set in Middle or High school where the girls seem really into each other, but I think it's supposed to be a really deep friendship, full of innocent hand holding & kisses, rather than 2 people falling in love.