Last week my betta Fishie went to that great pond in the sky. I had him a long time & he basically died of old age. I kinda knew it was coming as he had slowed down and hid most of the time and barely ate. I gave him a "burial at sea" and did a 50% water change on his tank since Snailie was still zooming around his tank. While that was going on, I had been slowly gathering what I needed to start another tank as I wanted another betta. So I got another sponge filter on Amazon, a bag of gravel & a "moon rock" (little ceramic cave) from Walmart along with air tubing, silk plants from Petco & another tank from Petco. They're small 2 1/2 gallon tanks & cuz they don't make tops for them, I had gone to AC Moore before they closed & bought plastic canvas which I cut to size & which makes a good, cheap tank cover. I do get evaporation issues, but when it gets to about a 1/4 inch from the top, I do a quick 2, 3 cup water change, using a turkey baster I got from the supermarket. (The dollar store only stocks them during Thanksgiving. XD) So all's good. I also picked up a thermometer strip & some moss balls from Petco. The moss balls I shared between my 3 tanks (I also have a 10 gallon full of self replicating Guppies. XD) They help with keeping the tank clean, by breaking down ammonia & nitrites (or nitrates?) Anyway, when I saw a few videos on Youtube about "glo-bettas" I had to get one.

They're controversial, since they're genetically modified by injecting jellyfish cells into the fish embryos (I think. XD The process is trademarked & patented) so they will glow from bio luminescence. I think they're cool, since they're genetic chimeras. Anyways, as luck would have it, I was wanting a female betta, not to breed, but just to have it as a pet, & glo-betta females are rather cheap. It used to be female veiltails were slightly cheaper than males, which are really cheap at about $4 a fish, compared to fancier males which can start at $10 & go up, depending on what you want. So I combined my wants & got a cute lil female glo-betta, I named Daisy. She's kinda highlighter yellow that's been greened down a bit (she's called neon green), with faint greening in her pectoral & dorsal fins. Her tail & caudal fins are faintly red. She's fat & sassy & has settled into Fishie's old tank rather nicely. I put her in there since the gravel is light beige & all the plants are dark green, except for a dark purple flowery one. She looks good against the dark background & while she doesn't glow like she would under a black/blue light, she does glow from the right angle.

When I went to get her tank from Petco, I looked over the bettas they had. There were a lot of "dead" ones of various colors, but I was looking for something light colored as I was looking for someone to put in Fishie's tank. I saw a gorgeous White Orchid male, but $20, or was it $25 was a lot to spend on a fish. Fishie was only $13 (now up to $15). Then I saw him, a pretty, purple-ish red, "old school," veiltail. He was sleek & lively, & perfect. I got him & named him Valentino as he reminded me of a Valentine. He spent a few days in Fishie's old tank, before being moved to the new tank with the brighter colored plants (I guess to go along with the glo-fish craze.) I meantime cycled his new tank by swapping filters & letting it sit for a few days.

Anyways, I was supposed to go to the Family Pet Expo, but Dad said not too with all the corona virus going around, so we went to Petco & he got me Daisy & a snail for Valentino's tank. It would have been her tank, but looking at her & how bright everything was, I thought she's get lost in it, so Valentino got it instead. They're both set up the same, with the only difference being, the gravel in one tank was the left over natural rocks from my guppy tank & the other has an orangey brown gravel I got from Walmart. (It was the closest they had to a natural looking substrate.) Also to make up for not going to the Family Pet Expo, Dad took me to the golf course where the foxes live. We got to see them & he took pix & one ran past me to close, I could have taken its pix with my phone, had I been expecting it. XD

On Sunday, we got up early & went out on the Island to this fancy area with million dollar homes on the beach where a male snowy owl was. OMG! He was just hanging on some junk in someone's million dollar yard, just chilling. :D He was too cute for words & with the warm weather this week, he'll probably head back up north sooner than later. It won't be long before the eagles & ospreys start nesting. I hope the owls in the one park come back this year & nest there again. :D Baby owls are just too cute! :D (I'm also hoping we can make a side trip to the carousel there so I can get a quick ride in. *LOVES carousels*)

Fox hanging out at the golf course. :D 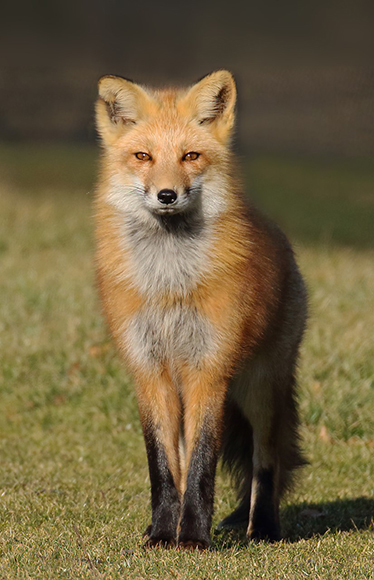 Snowy owl chilling at the beach in some fancy mansion's backyard. :D 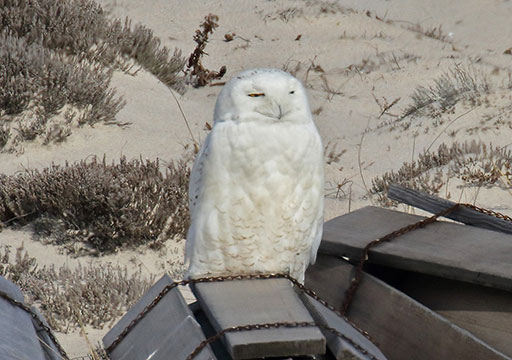 I work in a school doing childcare. Yesterday, we got a notice, while at work, that school would be closed today as a staff memember tested positive for the corona virus. One of the women I work with found something about a HS student in our district that came home from Spain on Saturday & was sick with it on Sunday. I found out that the school where I used to work, someone is sick with it & that they were cleaning the school. I just got a text saying school is closed tomorrow as well. I hope whoever is sick is okay. I'm also worried as teachers can go from school to school, a lot of kids have been out sick, & when they're getting sick, they hang all over you, which is how I got the flu (even with the shot). I also have asthma & right now a bad cold & everything winds up in my chest sooner or later. *has been sick a few times with a bad chest cold as well as spending a few days in the hospital from it* Please WASH YOUR HANDS as much as possible & DON'T TOUCH YOUR FACE if your hands aren't that clean. Everyone take care & treat this like the pandemic it is turning out to be! If you're sick, stay home! It might be a cold, but your immune system is fighting that off, why give it something else, which is deadly, on top of it?! Also avoid crowded areas. G-d will forgive you if don't go to services! You don't need that super awesome whatsit that's on sale at the mall! Be smart & be safe!!

While watching youtube, I sometimes listen to it & browse the comment section. Well, while "watching" a video on archery with a longbow, I happened to be browsing the comments & someone left a comment about writing a story about the youtuber Shadversity(whose video it was) accidentally killing a dragon with an arrow, when it was blown away by some wind. I took it as a challenge & the result is the following lil fantasy fic. The person who left the comment loved it. I hope Shad sees it & likes it as well. (*laughs* I've also read way too much George RR Martin's fantasy stuff, as I kept wanting to write "Ser" instead of "Sir." XD)


The Tale of Sir Shad and the Fateful Arrow


Sir Shad reached into his quiver, pulled out an arrow, and nocked it. Pulling back on his bowstring, he paused to sight his target, an old man shaped piece of parchment, before letting the arrow fly. One by one, in rapid succession, he hit on or near his target. Quiver empty, he sauntered over to retrieve his arrows, before repeating the process over and over again. His skill with the bow was legendary, for Sir Shad had won more archery contests at various tourneys than years spent as a squire and then a knight combined. A humble man, Sir Shad had no trouble learning from those he claimed were his betters as well those well met in battle.

The wind playfully ruffled Sir Shad’s hair as he pulled an arrow from the target. The leaves in the surrounding trees rustled as well and Sir Shad took a moment to enjoy the sound and coolness that caressed his cheek. He turned and walked back to where his warhorse grazed. Turning again, he faced his target and began practicing again. The wind picked up, sending a few arrows wide of the target, and he quickly compensated, the remaining arrows in his quiver hitting their mark. The last one dealt the target a killing shot despite the wind. His warhorse whinnied at the shadow that passed overhead and Sir Shad, figuring a storm was fast approaching, hurried to gather his arrows.

The last one picked up, Sir Shad looked up at the sky and frowned. It was clear and blue, the sun blazing down upon him. It was a beautiful spring day, with nary a sign of a storm in sight. Shrugging, Sir Shad continued his archery practice. Ignoring the wind and shadows, he called out to his warhorse to settle down when things briefly darkened and the animal tossed it head. The wind grew stronger and stronger, and taking it as a gift from above, Sir Shad practiced that much harder. When it became too hard to stand still long enough to take another shot, Sir Shad let that last arrow fly. Just as he let loose, the wind, blowing with all its might, pulled his bow upwards towards the storm darkened sky. The arrow flew straight and true, hitting its mark.

Sir Shad got the shock of his life when the storm, let out a howl of pain, before plummeting to the ground. He had somehow managed to kill a very large dragon with a single arrow to its breast. As if by magic, he hit the beast in the soft area between its scales, piercing its heart, with an arrow that went wide of its original mark. Sir Shad blinked. He shook his head, he must surely be dreaming, no? But proof of his prowess with a bow lay upon the crushed remains of a copse of trees. Sir Shad chuckled, the side of his mouth pulled upwards in a self-satisfied smirk. He had done the impossible; he had killed a dragon with a single arrow.
Collapse